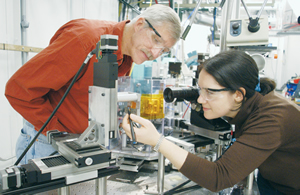 The long term, multidisciplinary research into the role of magnetite, and iron oxide, formation in neurodegenerative disease such as Alzheimer’s and Parkinson’s has been featured in a Nature Outlook article on biomarkers for Parkinson’s disease. This research began in 1999 as a collaborative effort with Chris Batich (MSE) leading tissue preparation efforts, Mark Davidson (MSE and Microfabritech) leading synchrotron analysis technique development, and Jon Dobson of Geophysics (now at Keele University, UK) leading magnetic characterization. Also on the team are John Forder specializing in MRI analysis, and Joanna Collingwood of Warwick who has focused on MRI and expanding our groups research from Alzheimer’s to Parkinson’s.

The research has resulted in new powerful techniques that allow ex-vivo of both quantitative and chemical state information at micron size scales. We have been successful in preparing tissue for analysis without changing the chemical state of the pathogenic iron compounds associated with neurodegeneration, and can analyze them in association with the tissues. We are developing MRI techniques that utilize the magnetic properties of the pathological iron compounds as a biomarker for the disease process. In addition, our developing understanding of the chemistry of these compounds associated with the disease process may aid in the understanding and future treatments of neurodegenerative disease. This research is truly an example of multidisciplinary research involving bioengineering, physics, chemistry, computational, and materials expertise all working closely together.