It is with great sadness that we share the news that Larry Hench, ACerS Distinguished Life Member and Fellow, lost his battle with cancer on Wednesday, Dec. 16. He turned 77 in November.

In his letter nominating Hench for Distinguished Life Member, Gary Messing says of Hench, “What a wonderful life ambassador he has been for our discipline.” Hench leaves an enormous, gently placed footprint in the world of materials science and medical science.

Hench grew up on a farm in the very small town of Tiro, Ohio and went on to have one of the most distinguished careers our field has known. Over the course of his career, Hench held appointments at the University of Florida, Imperial College London, and, most recently, Florida Institute of Technology. Most of Hench’s research focused on glasses, especially for biological applications. He is best known for having discovered Bioglass, the first synthetic material that bonds to living tissues. (See theFlorida Institute of Technology website for an extended biography of Hench’s significant scientific achievements, awards, recognitions, and publications.)

They say chance favors a prepared mind. Hench likely would disagree and instead say miracles favor a prepared mind. In a 2013 speech in Toledo, Ohio, he described his discovery of the 45S5 Bioglass composition as the result of three miracles—a “chance” conversation with an Army officer in the early 1960s, when wounded soldiers were returning from the Vietnam War; an award of funding by the Army medical branch to him despite his lack of a medical degree; and a fortunate selection of just the right composition in the Na2O–CaO–P2O5–SiO2 phase diagram.

This breakthrough has led to commercial applications for bone repair, dental restoration, enamel-healing toothpaste, and more. Literally thousands of lives worldwide have benefited from Bioglass technology.

Hench discovered Bioglass in 1969, just five years after earning his Ph.D. from Ohio State University, where he also earned his B.S. Bioglass was the first synthesized material that interacted with the body to initiate healing. Its discovery marked a significant shift in how researchers could think about biomaterials. Prior to Bioglass, researchers focused on materials that the body would tolerate without rejection. Bioglass inspired researchers to think about new ways to engineer materials for the body, which gave birth to the new field known today as regenerative medicine.

Hench was intrigued by the potential of man-made materials to help the body build new organs or even to replace organs. As recently as the 2014 ACerS Bioceramics meeting, Hench presented his ideas for ways materials could improve quality of life for the aged or injured by replacing or helping to regrow not just bones and teeth, but urethra, trachea, cartilage, and even organs such as kidneys. Certainly, the scientific challenges of engineering biomaterials appealed to Hench’s intellect and curiosity, but his generosity and humility drove him to use his unique training and talents to improve the human condition. He understood that pushing through boundaries in life sciences required also looking at the ethical and economic ramifications in the changing landscape. He embraced that conversation in books, in presentations such as the 2013 Rustum Roy lecture, and in a short course series he recorded for ACerS.

Hench published hundreds of papers, books, and proceedings over his long career. However, the publications he talked about most were his six books for children about the adventures of a bionic cat named Boing-Boing. His motivation was simple and personal. When his grandchildren were young, Hench grew weary of the typical caricature of scientists as socially awkward brainiacs in children’s books. So, he imagined a story wherein a young boy named Daniel befriends George, the engineering professor who lives next door. Daniel longs for a cat, but allergies prevent his having a pet. George understands the boy’s dilemma and goes to the lab to create a bionic cat, much to Daniel’s delight. As one might expect, this threesome have a number of interesting adventures, all of which are recorded in the books.

In a letter to the editor of the Ceramic Bulletin in 1967, at the beginning of his career as a professor, Hench provides a glimpse into how he viewed his life’s work, even as a young man. He sent an electron micrograph of a phase-separated semiconducting glass with a distinctive heart-shape to the editor. His letter concludes, “In case there have been any doubters in the world, we feel this conclusively proves that ceramics is a field into which you can put your heart.”

Hench had a big heart, and he touched many lives through his work as a scientist, health advocate, children’s author, colleague, mentor, and friend. Scientists do not often see directly the impact of their work, but Hench did. He responded with gratitude that his work helped so many people heal and regain health.

On a personal note, I’m of the generation of ceramic engineers who were trained when Hench was in the prime of his career. Being familiar with his work, and having read some of his papers and the classic book edited by George Onoda and Hench, “Ceramic Processing Before Firing,” I was a bit star-struck when I met Larry in person about five years ago. He would have nothing to do with stardom, which left me, like most who knew him, smitten.

Burial will be private. A memorial service will be held in January 2016 in Florida. Details will be announced at a later date. 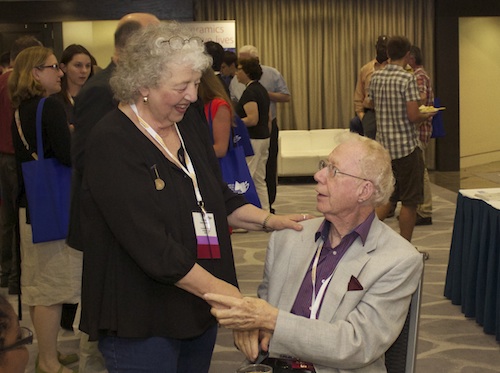 You can view the original article at: