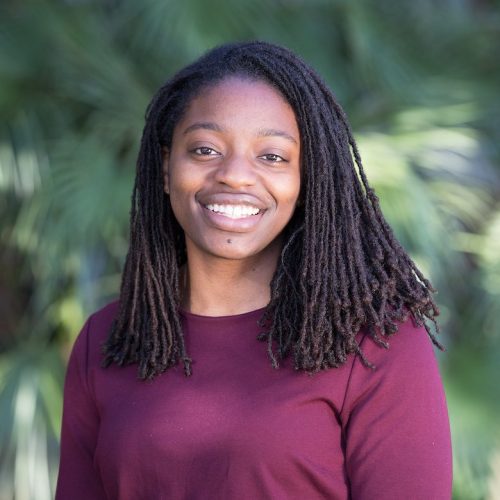 Erika M. Moore, Ph.D., has joined the Herbert Wertheim College of Engineering at UF as the holder of the Rhines Rising Star Larry Hench professorship. This is the first of two Rhines Rising Star assistant professorships in the Department of Materials Science and Engineering (MSE). Moore attained her B.S. in Biomedical Engineering from Johns Hopkins University and earned her M.S. and Ph.D. in Biomedical Engineering from Duke University. In 2017, she served as a Graduate Young Trustee on the Duke University Board of Trustees.

Moore’s research focuses on the intersection of biomaterials and immunology. “As we work with these biomaterial systems outside the body, they will, at some point, have a role inside the body; and we must be cognizant of the immune response of the cells in order to achieve optimal outcomes,” she said. A graduate researcher in the Jennifer L. West Lab at Duke, her Ph.D. dissertation centered on “Investigating the Roles of Macrophages in Vessel Development Utilizing Poly Ethylene Glycol (PEG) Hydrogels.” Moore has authored numerous papers on this subject, including “Bioactive poly (ethylene glycol) acrylate hydrogels for regenerative engineering”, Regenerative Engineering and Translational Science(accepted July 2018). She also presented on this topic at the World Biomaterials Congress in 2016. She hopes to continue and expand her work in this area at UF.

“Dr. Moore specializes in the use of biomaterials to alter the immune response of the body,” said Dr. Michele Manuel, Department Chair and Rolf E. Hummel Professor of Electronic Materials.  “Her work further strengthens and solidifies our continued efforts in the biomaterials area which was initiated by Drs. Fred Rhines and Larry Hench.” Hench joined the MSE department in 1964 and invented Bioglass, the first human-made material to bond with living tissues; Bioglass is now used to repair bones, joints and teeth.

Moore was a member of the Biomedical Engineering Society (BMES) Diversity Committee and the founder of Engineering a Community at Duke’s Pratt School of Engineering. She enjoys working with students and looks forward to helping build their self-confidence and passion for engineering. “I am a strong believer in diversity and student-faculty interaction,” Moore said. “I preferred UF to other schools I spoke with because of the attitude of the engineering college and the entire university toward student health and wellness as a critical factor in academic success.”

During the 2019 academic year, Moore will serve as a visiting professor at Johns Hopkins. She will be fully on-boarded at the UF campus in the spring of 2020.

If you didn’t know the story behind this honor, the Rhines Rising Star Larry Hench Assistant Professorship is one of two named professorships that are being awarded to selected early career faculty who are already demonstrating distinguished performance in engineering research and teaching.  Dr. Walden C. Rhines, son of Fred Rhines, the founder of the Department of Materials Science and Engineering at UF, has made a gift of $1 million to the department to establish the Rhines Rising Star Professorships.

His father, Fred Rhines founded the MSE department on the talents and promise of early career faculty, with the philosophy that outstanding people want to work with other outstanding people. This gift, says Rhines, will continue to honor his father’s legacy to support assistant professors of this caliber.