Professor of Materials Science and Engineering 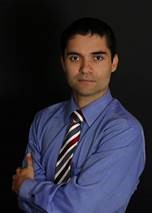 Rare-earth doped ceria systems are excellent electrolyte candidate materials for intermediate temperature solid oxide fuel cells (IT-SOFC) applications due to their high oxygen ionic conductivity and ease of processing in bulk, thick and thin film forms.  Here we investigate the phenomenon of bias induced mixed ionic and electronic conductivity in gadolinia doped ceria (GDC) thin films deposited using RF sputtering.  Electrochemical impedance spectroscopy is used to track changes in the electrical conductivity of the films under applied dc biases up to 120 kV/cm and an alternating voltage of 300 mV at temperatures between 25°C and 350°C.  It is found that the application of dc bias produces a reversible decrease in both the grain and grain boundary resistances for GDC, a response indicative of mixed conduction.  In the past, many acceptor doped dielectrics have been shown to exhibit similar mixed ionic and electronic conductivity under the application of a DC bias.  Interestingly however, for certain bias and temperature conditions, it was found that a third arc starts to appear between the grain and grain boundary impedance arcs in the Nyquist plots.  The arcs get progressively depressed with increasing bias and eventually transition into clear arcs below the real axis, forming inductive loops at low frequencies.  Here we showcase this unique behavior and analyze the data through residual optimization of equivalent circuits models to gain insight on the underlying conduction and diffusion mechanisms at play.

Dr. Juan Claudio Nino, is a Professor in the Materials Science and Engineering Department at University of Florida (UF) in Gainesville, FL. He obtained his bachelor’s degree in Mechanical Engineering in 1997 at Los Andes University (Bogotá, COLOMBIA). He was a Lecturer at the Colombian Engineering School before joining The Pennsylvania State University in 1998, where he completed his doctoral degree in Materials Science and Engineering in 2002. After a postdoctoral appointment focusing on ferroelectric thin films at the Materials Research Institute (State College, PA), he joined UF in Fall 2003 as an Assistant Professor. Since, he has established the Nino Research Group (NRG) with main focus of the development of energy-related materials towards enhancing their efficiency, performance, and sustainability. He received tenure with promotion to Associate Professor in 2008, and was promoted to Professor in 2013. Research at NRG investigates the synthesis and characterization of inorganic and organic compounds in bulk, single crystal, thin film, and nanofiber form. With over 120 publications in the field and five patents, current research focus includes optimization and development of materials for: (a) electrolytes and cathodes for ionic and protonic conduction devices, (b) high frequency and high temperature dielectrics, ferroelectrics and piezoelectrics, (c) porous ceramics and composite foams, (d) advanced nuclear fuels, and (e) semiconductors and scintillators for radiation detection. He is a recipient of the CAREER Award by the US National Science Foundation, the J Bruce Wagner Jr Young Investigator Award from the Electrochemical Society, and the Fulbright US Scholar Innovation and Technology Award from the US Department of State. He is an Associate Editor for the Journal of the American Ceramics Society, and a Coordinating Editor for the Journal of Electroceramics.